Northern California's Bull Kelp Forests Are Being Eaten By Urchins

An article in The Press Democrat out of Santa Rosa explores the devastation going on just off the California Coast. Millions of tiny purple sea urchins are eating the Bull Kelp down to the roots or those things that kelp use to cling to the rocks with. The sea stars used to eat the urchins but those too all but disappeared a couple of years ago. 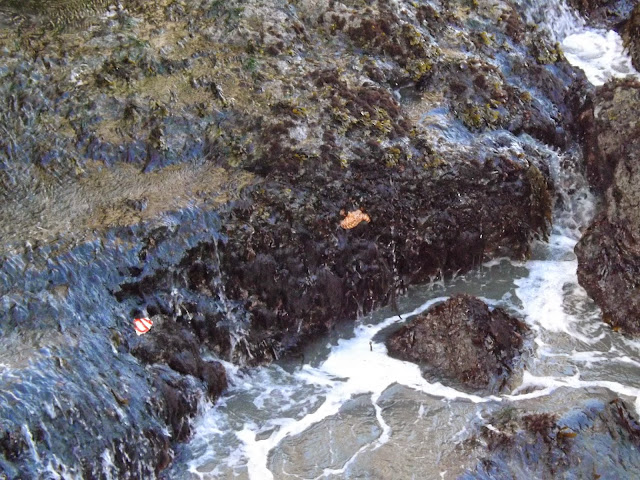 (The above rock used to be covered with Sea Stars or starfish as most people call them. I took this picture in April of 2015 from the Trinidad Pier. They say the die offs started in 2011.)

It's like locusts but in the ocean. The article has input from, scientists, divers and fishermen all describing a massive die off taking place just off shore. Factors such as acidification and warmer water are being discussed as the main culprit for species getting all out of whack.

They say it's still to early to say exactly what is causing all of the problems, but do say that most kelp will come back if it is given a bit of space and time to grow. It may be possible that the ocean could cool down a bit and things go back to the way it was before. You know, back when we were more focused on the pending radiation from Fukushima and not a total collapse of the ocean food chain.
Do read the lengthy article here and if you can help, see below.

State scientists are seeking help with data collection and other activities, as well as observational accounts, photos and videos related to the urchin barren. Shared images and information should, if possible, include the date, location and depth at which they were acquired. Contact Cynthia Catton at Cynthia.Catton@wildlife.ca.gov or 875-2072.