Are Our Elections Rigged?

Social media is full of memes and stories about how Hillary should have gone to jail for the so called e-mail scandal that isn't really a scandal.  There are the stories about Trump allegedly raping a 13 year old girl. Another how Trump solicited campaign donations from foreign leaders which is illegal. 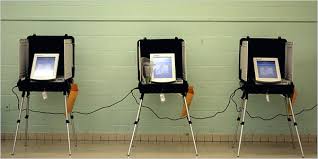 I have been saying that there is a different standard that some high level politicians have than the standards that apply to you and I as normal US Citizens. Bush and Cheney seemed to have committed war crimes but they haven't been prosecuted or even charged. Finally an investigation done in England may have triggered an investigation into George Bush's handling of the Iraq war. It now seems clear it was a war of choice for Bush and Blair. Maybe they will actually get to the bottom of it. A CIA agent was outed to make their case for war but only Scooter Libby went to jail for that.

Just some observations about how things got this way:

1. The United States is not a democracy.

2. Our representatives represent those that give to their campaigns, not their constituents.

3. Most of our votes are counted in secret by source code owned by private corporations. The voting machines are owned or leased by tax payers but the source code that counts the vote isn't.

4. The exit polls that had been to verify our elections stopped working when these machines came on line.

5. Out of 58 counties in California alone, only one county had election results that matched the exit polls and that county was Humboldt. The odds of that are astronomical. Humboldt not only has a way to verify our voting, we check a decent sample every time just to make sure.

6. The US State Department still uses exit polling to determine if foreign elections are valid. Any election off by more that 2% from the exit polling is considered suspect for fraud.
(This is actually an example of why exit polling works, it just means that our voting system is broken because some places in the US primary election were off by more than 12%)

So in conclusion, I feel that arguing over who did what, or who got the most votes or even whether or not our elections are rigged is moot. We have no way of knowing whether our elections are rigged or if our votes are even counted in most places in this country. What the country needs is standardized federal elections. One source code for all the machines and simple instructions for the secretaries of state to pass on to the county election officials of how to properly check the machines for accuracy and calibration before the elections. There should be one hotline for elections officials to call to get help with technical matters and that's it. Outsourcing our most cherished right as US Citizens to private corporations which in turn count our votes secretly is one of the stupidest things this country has ever done.

I'm not saying that our elections are rigged but there isn't a person on the planet that can prove that they aren't.