Sarah Jaffe On The protests against a dirty oil pipeline by The Standing Rock Nation.

The first sign that not everything is normal as you drive down Highway 1806 toward the Standing Rock reservation in North Dakota is a checkpoint manned by camouflage-clad National Guard troops. The inspection on Sept. 13 was perfunctory; they simply asked if we knew “what was going on down the road” and then waved us through, even though the car we rode in had “#NoDAPL” chalked on its rear windshield. 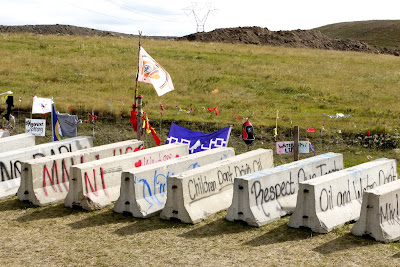 “What is going on down the road” is a massive camp-in led by the Standing Rock nation, aimed at blocking the construction of the Dakota Access Pipeline (the DAPL in question), which would carry oil from the Bakken shale in North Dakota across several states and under the Missouri River. What began with a small beachhead last April on the banks of the Cannonball River on land belonging to LaDonna Brave Bull Allard has expanded to both banks of the river and up the road, to multiple camps that have housed as many as 7,000 people from all over the world. Because of them, first the Obama administration and then a federal court stepped in to temporarily halt construction of the pipeline near the campsite. Still, the people of Standing Rock and their thousands of supporters aren’t declaring victory and folding their tents just yet.

We’re already winterizing in all aspects of the camp.
— LAY HA

The legal struggles for a permanent shutdown of the pipeline construction continue:
Read More Here from Moyers & Company and Sarah Jaffe.
Posted by Tom Sebourn at 12:33 PM