There was a local twist to the "local twist" reported about the Thai Cave Rescue that took place recently which was mostly overlooked.

News that Elon Musk of Space X and Tesla fame had flown up to Humboldt to obtain rescue vehicles still being invented and tested, was followed with a couple of tweets from the eclectic inventor. 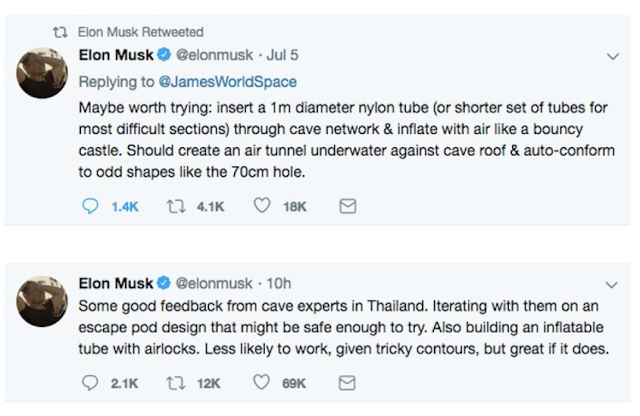 On July 3rd. I got an urgent message from a friend of mine and Humboldt County resident, Robert B. Stretton. 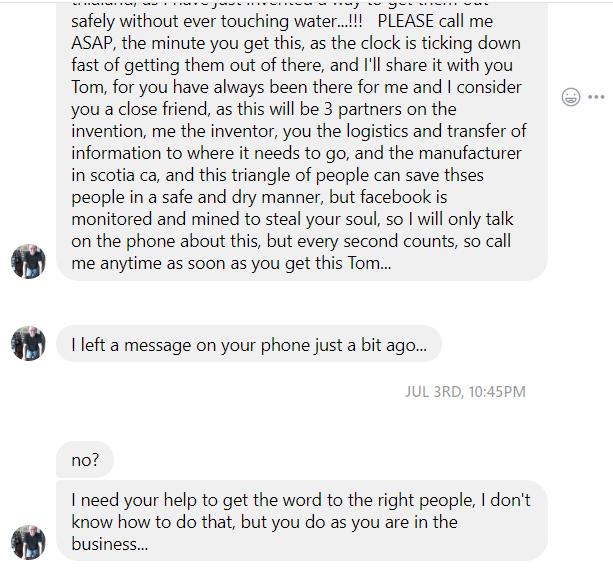 Robert was frustrated because it was the night before the Independence Day holiday and Robert couldn't get in contact with anyone and wanted me to help get the word out. I having been off work for over a year now due to an accident am not current with all of my old contacts. So with that and the holiday and it being late at night, I suggested he call CNN and then gave him some information to contact the company helping the rescue.

Robert said he called Wings Inflatables the morning of the 5th. when he was finally able to get hold of someone and talked at length on the phone about what needed to be built.

Here is what happened in Robert's own words from his web site.


I don't know who I talked to but I discussed about making the tunnel and you are the only guys that can make this NOW, and the guy I talked to said we could not make anything that big, and then I said, "How about an inflatables submarine then, a pod you could put them in with ballast water weight for neutral buoyancy to float them out in a chamber so they are not more traumatized than they already are?", and he said, "Yeah, we might be able to build something like that.", and then I said, "The clock is ticking so let me know if you guys can build this, and then get back to me if you can do it.", and I never heard another word from them...
Then Tom Sebourn told me on his Facebook page that they used my idea, after, I had called "Wing inflatables" and also sending a message to Elon Musk on his Facebook page later that day on the 6th about my idea and that we need to make this happen RIGHT NOW so we can save those boys, and then I discovered "Wing inflatables" stole my idea and never mentioned my name, which was given to them along with my cell number to call me back if they could do it or not, and I never got a call at all, but I did get the news they stole my idea and just set the clock back to 5:00 AM to superseded what I told them at 8:13 AM for a 5 minute conversation in order to take credit for it, but, I published my idea on my website for the pubic view in hopes of assistance from anybody that would help and do the right thing for these boys, and the instant I hung up on the phone with "Wing inflatables", I immediately updated my webpage to include what I had just told them about making the submarine instead of the tunnel.
This page is not linked to my main website as to not disturb the timestamp at the bottom of my main website as the timestamp is still live from my last update of the 4th of July ( look at the sourcecode of my main page, and you will see that my computer automatically puts the timestamp it was saved, at the bottom of the page, and then was immedately uploaded to the server as the document from my hosting company proves. ) which proves I had the page up on the 4th of July, 2 days before "Wing inflatables" and Elon Musk Engineers who were also notified, about this idea as they were both told to go to my website, www.RBSe.us/...[item #1]...for an explanation on what to do, back on the 3rd of July when it was first published as it says on the timestamp of creation on the document at the top!

So just for the record, this guy was thinking about how to get those boys out of those caves and had some of the same ideas that Elon Musk had. He even posted his idea on his web site on July 3rd. about an inflatable tunnel and small inflatable submarines.

Here is a capture of the idea when he proposed it on his website. 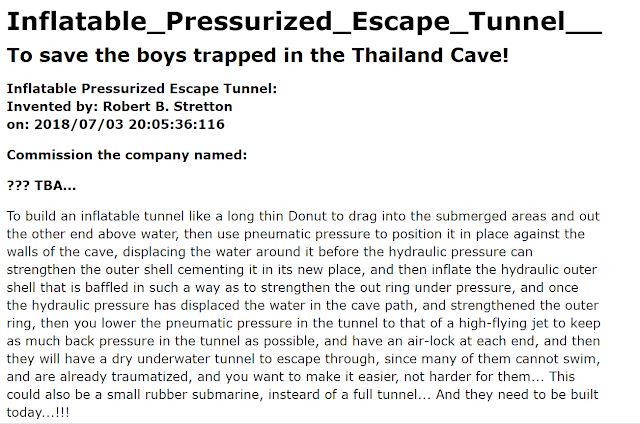 Robert B. Stretton told me not to bother trying to set the record straight. He said nobody cares. I figure that someone cares and perhaps many would like to know that some of the best ideas might just be brewing right here behind the redwood curtain AKA Humboldt County.

There is more contact info there if you care.