It's Time For Congress To Take Up Articles Of Impeachment

I am going on record recommending Congress take up articles of Impeachment against Donald Trump.

This does not mean removing the President from office. 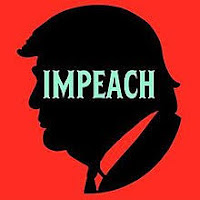 Impeachment proceedings will only determine if there is enough evidence for Congress to in fact, impeach the President. This doesn't remove him and make Pence in charge. It just removes most of his presidential powers.

The proceedings would be a circus for the press and they would fight over each other just to cover all the action. The American people would finally get to see what these people are and what they have really been up to.

Once normal people see what is being done to them, public opinion will change and there should be little worry of having Trump elected by any country, much less our own in 2020.

If the democrats in the House don't hold this president accountable, they will have set a precedent saying essentially that the office is above the law. If Trump has done nothing wrong, he has nothing to fear and it could backfire on the democrats. Based on what we know, this last possibility is about as likely as me becoming Trumps Press Secretary.