WASHINGTON - Today, election security advocates from across the political spectrum called on the U.S. Senate Rules and House Administration Committees to hold the nation’s largest voting system vendors to account in a hearing on election security. 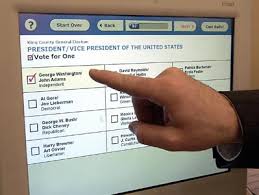 The groups sent a letter signed by Public Citizen, FreedomWorks, the National Election Defense Coalition, the NAACP, the Electronic Privacy Information Center (EPIC), the League of Women Voters, Project On Government Oversight (POGO) and several others, and calls on the U.S. Senate Rules and U.S. House Administration Committees to bring major national voting system vendors to Capitol Hill for hearings to answer for their continued practice of selling insecure voting systems to states and localities.

Both The New York Times Magazine and McClatchy Co. have extensively reported on the questionable practices and sales conduct of voting systems vendors. Questions abound about new machines with Windows operating systems that expire before November 2020, voting machines that connect to the internet and non-disclosure of the vendors’ owners and major investors.

In February 2018, the Times Magazine reported that one of the largest voting system vendors, ES&S, pre-installed remote-access software on its voting machine systems. The company then denied the software’s existence in press reports. Remote access software which operates over the internet allows for backdoor entry by hackers into voting systems. Later, the company responded to a letter of inquiry from U.S. Senator Ron Wyden (D-Ore.) and reversed itself, admitting that it did install remote-access software on some of its voting machines, but did not detail how many.

The letter notes that the last hearing the Senate held to which the vendors were invited, only one of the largest vendors agreed to testify. The letter closes by urging the Committees to “require participation by the voting system vendors” to ensure that a hearing can be held.

Read the joint-letter here.
Posted by Tom Sebourn at 1:56 PM