You haven't received any updates from me in a few months because at about 6am on March 16th, the windows were smashed in at the FTL studio, which is also my home.  Approximately two dozen armed men and women from the FBI, IRS, ATF, USPS, and others decided to pay us a very rude visit and steal some computers and phones, as well as kidnap me and my next-door neighbor and co-host "Nobody".  At the same time they were raiding the home of another FTL co-host, Aria DiMezzo, as well as a few of our mutual friends. 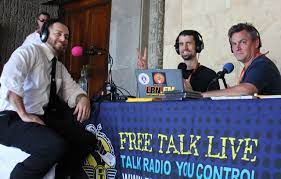 In total, six of us were arrested and have been charged with various victimless "crimes" relating to the alleged distribution of Bitcoin without government permission.  Four of the six were released on the same day, while me and Nobody were held pending bail hearings.  My first hearing took weeks to get the ruling, but the magistrate denied my release, calling me a flight risk and "economic danger to the community".

We subsequently appealed and six weeks later an actual judge released me on some very restrictive bail conditions.  Nobody is still being held and is appealing his initial bail denial as well.  My bail conditions include home confinement, no access to cryptocurrency, and I'm prohibited from speaking with my co-host of nearly 20 years, Mark Edge, as well as Aria, Nobody, and several other mutual friends.  We plan to fight these restrictions as they are a clear violation of the right to free speech and free association.  One thing is for sure - it certainly doesn't feel like "innocent until proven guilty" with 69 days behind bars pre-trial and insane bail conditions, that I've only glossed over here to keep this update short.

We are denying the ludicrous charges against us and planning for a trial in 2022.  I am facing the brunt of it and have been labeled a "sophisticated criminal" and "kingpin" by the prosecutors.  Bitcoin of course, is not illegal, so they had to cook up some other scary sounding charges like "wire fraud" and "money laundering" and the biggie, "continuing financial crimes enterprise", which alone has a ten-year minimum sentence.